These materials were provided by Marsha El-Khouri Shriver and primarily relate to the life of her father, Joseph Maroun El-Khouri, and his family in Lebanon and in the United States.

Joseph served as an intelligence agent and interpreter for Great Britain during World War II. In 1949, Joseph travelled to Minneapolis, Minnesota to help settle an uncle’s estate. Initially Joseph had no intention of immigrating permanently to the United States, but soon after he arrived he met and fell in love with Rose Isaac while visiting relatives who lived in the large Lebanese community located in Wilkes-Barre, Pennsylvania. Rose was the daughter of Thanios (Thomas) Isaac and Moura (Nora) Lawandos Isaac, who immigrated to the United States in 1912 and 1914, respectively, and were married in 1917. Thanios Isaac supported his wife and five children by working various laboring jobs, including for the railroad and a local wiremill. Thanios Isaac passed away in 1939.

Joseph and Rose married in Rose’s hometown in 1950, and moved to Minneapolis where they operated a grocery store until 1953. Joseph was naturalized in 1954 with the help of his friend Vice President Hubert Humphrey, at the time a Minnesota senator. In 1955, Joseph and Rose moved to Andrews, North Carolina, to be closer to Rose’s sister Bessie Isaac Jabaley, who was living near her husband’s family in Copper Hill, TN. The Jabaley’s helped the growing El-Khouri family establish themselves in their new home by making Joseph the manager of their department store, Jabaley’s, which Joseph purchased and renamed to Khouri’s in 1965. The store remained open until 1989.

Joseph quickly established himself as a prominent civic leader in North Carolina. He served on a number of boards and service organizations including: the Andrews Lion Club, Western Carolina University Board of Visitors, Cherokee County United Way, the Andrews Chamber of Commerce, and the Daniel Boone Council of Boy Scouts. Joseph was a devoted Democrat, even serving, with his eldest son George, as an elected delegate to the 1988 Democratic National Convention in Atlanta. In addition to these civic and political accomplishments, Joseph and Rose were pillars of the Catholic community in North Carolina, holding the town’s first Catholic masses in their own home, and donating the land upon which  the Holy Redeemer Catholic Church was built in Andrews, North Carolina.

Joseph and Rose had seven children: George Maron El-Khouri, Theresa El-Khouri Martin, Mariam El-Khouri Gerber, Marsha El-Khouri Shiver, Barbara El-Khouri, Catherine El-Khouri, and Anthony El-Khouri. Joseph passed away on July 22, 2012; at the time of collection acquisition (2012), Rose El-Khouri was still living. Since his passing, Joseph El-Khouri’s contributions to North Carolina have been recognized locally, and his legacy has been carried forth by his children and grandchildren.

The collection consists of photographs, letters, documents, and articles relating to the life of Joseph Maroun El-Khouri, his wife Rose Isaac El-Khouri, and his children. The material details Joseph's career and community contributions as well as providing insight into multiple generations of Lebanese-American family life.

The collection also contains photographs and letters relating to Joseph El-Khouri’s relatives in Lebanon, as well as materials from Rose Isaac El-Khouri’s family in Wilkes-Barre, Pennsylvania. 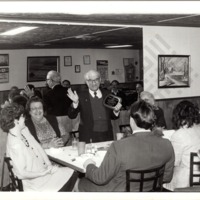 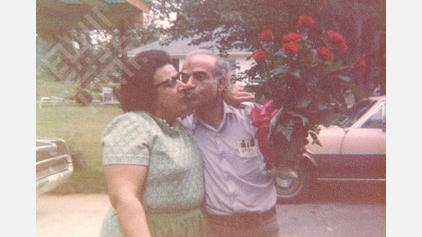 Rose and Joseph El-Khouri together outdoors, kissing and embracing.

A snapshot taken on Christmas, 1963, of Joseph El-Khouri, Rose El-Khouri, and a selection of their children. 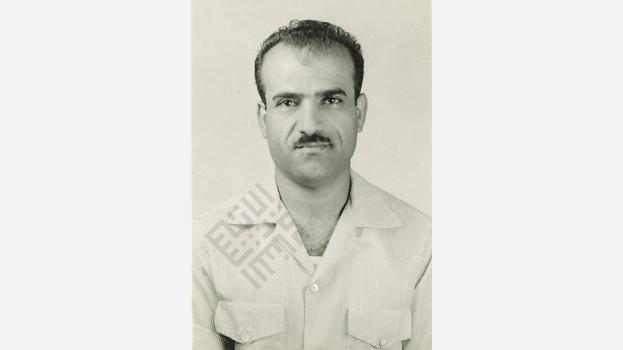