Naoum Antoun Mokarzel (1864-1932) and Salloum Antoun Mokarzel (1881-1952) were influential intellectuals who immigrated to the United States from Lebanon in the late nineteenth century. Both were prominent Lebanese-American intellectuals who used their family-owned publishing house, the Al-Hoda Press, to preserve their heritage for diaspora communities across the world and to educate English-speaking audiences about the rich history and culture of Lebanon.

The Mokarzel brothers were the sons of Antoun Mokarzel, a Maronite Priest, and Barbara Akl Mokarzel. They were born and raised in Frieke, Lebanon. Naoum Mokarzel emigrated to the United States in 1890, at the age of 26. Naoum explored various career options as a young man, including:  shopkeeper, bookkeeper, journalist, and medical student. While working as a bookkeeper in Philadelphia he founded Al Asr, a fledgling newspaper which quickly failed. Shortly after, in 1898, Naoum founded Al-Hoda [Guidance] as a biweekly publication; the first issue was published on February 22 of that year. In 1902, Naoum moved the paper from Philadelphia to New York and began publishing it as a daily. Newspapers proliferated among the populous Lebanese immigrant community in New York City, but among them Al-Hoda stood out in its wide circulation and international sphere of influence. Though Naoum frequently insisted upon his own journalistic integrity and objectivity, Al-Hoda was guided from the start by a fierce devotion to the cause of Lebanon; it also initially leaned towards Maronite interests, against Orthodox views. In his editorials and articles, Naoum was quick to rise to the defense of both his homeland and himself, a tendency that often stirred controversy even as it furthered Naoum's political goals.

Around the time that Naoum founded Al-Hoda, his much younger brother Salloum joined him in the United States. Though Salloum travelled back to Lebanon to obtain his higher education at St. Joseph’s University, he was quickly folded into the new family trade of publishing. Salloum quickly established himself as an innovator in his own right:  in 1909, he catalogued and published The Syrian Business Directory, an inventory of Syrian businesses in the United States. In the next year, he patented the first Arabic linotype machine, an invention which helped modernize Arabic publishing; this innovation contributed to the explosion of the Arabic press in both North and South America. In the 1910s and 1920s, Salloum published scholarly works through the imprint called The Syrian-American Press; he also carried forth his interest in Lebanese business endeavors through the monthly journal Al Majallah Al-Tijariyeh [Syrian-American Commercial Magazine], which he edited from 1918 to 1926.

Despite their shared vocation, the two brothers had very different personalities and political goals. Naoum had a fiery commitment to Lebanese independence:  in 1911, he founded the Lebanese League of Progress in an attempt to unite the Lebanese diaspora behind the cause of Lebanese independence. Naoum was among the delegation from Lebanon sent to the Paris Peace Conference of 1919. Though Naoum  was an outspoken and passionate figure whose devout Maronitism, Lebanese nationalism, and willingness to critique the diasporic community often created controversy. By contrast, Salloum was known as a gentler figure, more interested in building new communities and hybrid cultural identities than in influencing political change in the homeland. Despite his very different aims, Salloum, too, was a formidable influence both to his peers and to younger generations of Lebanese-Americans.

The difference between the brothers’ personalities and political goals is represented by the differences in their publications. Throughout World War I and the following years of geopolitical chaos and decolonization, Naoum was deeply involved in nationalist movements. His decision to publish Al-Hoda in Arabic indicates his continuing commitment to a diasporic community which faced towards and participated in the culture and political realm of the homeland. By contrast, Salloum was interested in translating and modifying his birth culture to thrive in various new homelands. To facilitate this goal, in 1926, Salloum launched The Syrian World, which he initially conceived as an academic journal aimed towards a hybrid audience of second-generation children of immigrants and Americans of non-Lebanese descent. Between 1926 and 1932, The Syrian World was published as a monthly journal. During this time, it served as an outlet for scholarship on Syrian and Lebanese history, as well as topics pertinent to the immigrant community such as health, current events, and preserving Lebanese heritage for younger generations. In served as a platform for Salloum to initiate his plans for community formation through his editorials; for example, Salloum put out a call for the formation of regional federations like the Southern Federation of Syrian and Lebanese American Clubs in a editorial in the late 1920s. In 1932, the combined factors of the Great Depression and the death of Naoum Mokarzel led Salloum to scale back his involvement in the paper; its format was changed from the style of an academic journal to a more traditional newspaper. This incarnation of the paper--which lasted from 1932 to 1935--consisted of daily news on both transnational and local levels.

Naoum Mokarzel had three marriages:  Sophie Shishim, between 1898 and 1902; Saada Rihani between 1904 and 1908; and Rose Abillama, from 1910 until Naoum’s 1932 death. Naoum had no children, and Salloum and his family were Naoum’s heirs. In 1908, Salloum married Helen Abu Khalil. Together, the couple had five daughters:  Mary, Rose, Alice, Yemna, and Lila. By 1919, Salloum and Helen moved their family to Cranford, New Jersey; however, the children were raised to be highly educated world citizens, encouraged towards literacy in both English and Arabic. In 1925, Helen took her five daughters to Lebanon, where the girls travelled and attended school until returning to America in 1927.

Naoum died in 1932 on a visit to Paris, where he was serving as a representative of diasporic communities for Lebanon’s transition from French colony to independent nation. This led Salloum to take up the role of editing Al-Hoda. During this time, Salloum became increasingly well-known, contributing to the Lebanese pavilion at the 1939 New York World’s Fair and serving as a dignitary at the 1946 opening of the United Nations. Salloum died in 1952. The bodies of both brothers were repatriated by the government of Lebanon, and are buried together in the family tomb in their native city of Freike, Lebanon.

The Mokarzel brothers’ legacies were carried on by Salloum’s five daughters. After a struggle over the ownership of the paper, Salloum’s eldest daughter, Mary Mokarzel, carried on the publication of Al-Hoda. In 1954--perhaps in remembrance of her father’s English-language journal The Syrian World--Mary acquired The Lebanese American Journal, which she published in tandem with the Arabic paper until September 1971. Yemna was also committed to the family business, supporting her sister’s social, political, and business endeavors and serving as a correspondent for the papers.

Alice Mokarzel married Edmond Jaoudi and had two children: Dr. Maria Jaoudi, a professor of Comparative Religion who has one child, Harrison Smith-Jaoudi, with her husband, Harry Smith; and Edmond Jaoudi Jr., a technology administrator who has three children with his wife Barbara: Michael, Steven, and Anna.

This collection, generously provided by Salloum Mokarzel's granddaughter, Helen Hatab Samhan, contains material related to three generations of the Mokarzel family. It consists of: historic and more recent photographs of the Mokarzel brothers and their descendents; articles about the family; journals; and correspondences between members of the family. The collection has a special emphasis on the papers of Mary Mokarzel; these include:  correspondences, including Mary Mokarzel's letter drafts and notes; and business papers, particularly relating to the family property in Freike, Lebanon. 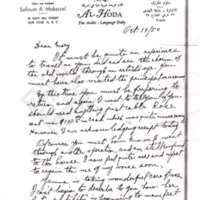 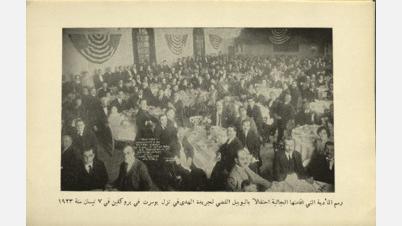 الشواعر الشريفة [The Noble Sentiments] is an edited collection of poems and speeches presented on April 7, 1923 in honor of Silver Anniversary celebration of Al-Hoda [Guidance]; the second half of the text contains material presented at a similar… 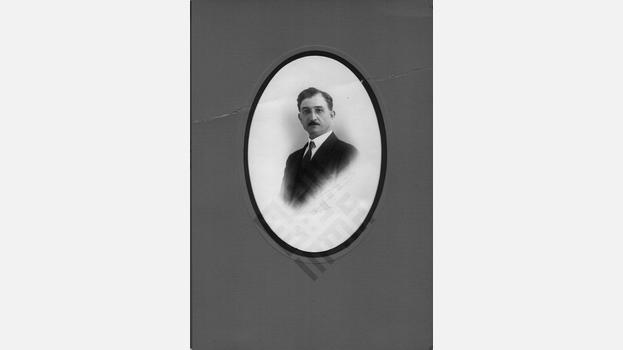 Portrait of Salloum A. Mokarzel, 1935 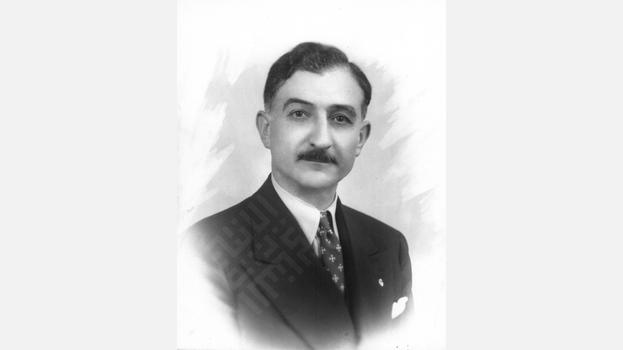 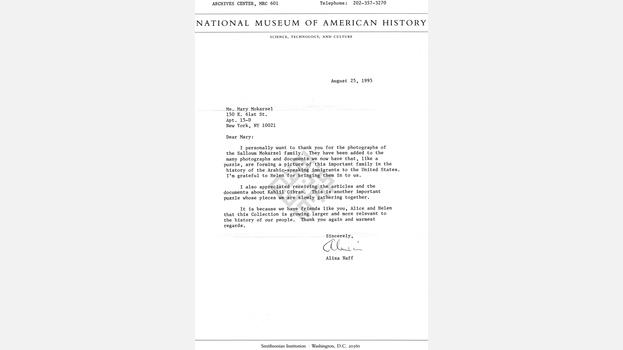 A letter from historian Alixa Naff of the National Museum of American History to Mary Mokarzel thanking her for the donation of family photos and documents. (Folder 1-1-1-1)