The Willett family is descended from John Rasheed (Richard) Saleeby (February 15, 1896-June 16, 1969), who was one of the seven children of Labibee Courie and Rasheed Saleeby. In the early twentieth century, the Saleeby family already had three cousins—Elias, Mitchell, and Thomas Saleeby—who had moved to and settled in Wilmington, North Carolina. Inspired by their relatives, and interested in saving their many sons from being drafted into the Ottoman Empire army, Labibee and Rasheed began making plans to gradually move their family to America over a period of years. First the eldest son, Gibran (G.R.) came to North Carolina, planning to establish a family business before his parents and younger siblings joined him. However, the family’s immigration plans were hastened by the death of their father, Rashid Saleeby, in 1912; his passing pushed the family to leave their home town of Souk el Gharb, Syria (in modern-day Lebanon) earlier than planned. In December, 1912, Nasry Rasheed “Charlie” Saleeby arrived in America with his mother, Labeebee Khoury Saleeby, and younger siblings:  Michael, John, Elijah, George, and Mary. G.R. remained in the Goldsboro, where he had married and established a family. In contrast, the Saleeby siblings purchased a house in Wilson, NC, at 508 S. Park Avenue, and started a candy shop and soda fountain, which was located on Nash Street in Wilson, North Carolina.

Unlike many other immigrants, this branch of the Saleeby family was advantaged upon their arrival due to the fact that they had studied fundamental English at the Presbyterian Church School in their hometown of Souk el Gharb as children. The family’s initial candy business was successful; however, a disagreement over the lease led Charlie to close the shop. At this point, the brothers decided to enter into the wholesale business together, and even the established eldest brother G.R. joined in and relocated his family to Wilson. The wholesale business was called G.R. Saleeby and Bros. John worked at this family business for years until starting a wholesale business of his own, located on Barnes Street. John specialized in shipping, with particular emphasis on bananas; he came to own a small fleet of three large trucks.

In 1925, John returned to Lebanon, where he met and married Helen Massaad. Helen left her mother and her brother, Elias, to immigrate with her new husband to Wilson, North Carolina. They lived in the family home on Park Avenue for several years until moving to a house of their own on Bruton Street, where most of their eight children were born; in 1944, they relocated to West Nash Street, where their youngest child, Shirley, was born. Family members remember Helen fondly as an excellent cook and a lifelong lover of music who sang in the church choir for 59 years. Their houses were gathering places for the other children of Labibee and Rasheed and their own growing families; as well as other members of the extended Saleeby/Salibi family.

John and Helen had eight children together:  Frederick John; George John; Wade Samir; Laurence; Mitchell; Ralph; Claudette; and Shirley. During World War II, their four eldest sons served in the United States Armed Services. Frederick John Saleeby (1926-2013) served in the Pacific during World War II, where he witnessed the official Japanese surrender; he was a first lieutenant during the Korean War, and retired from the Army Reserve as a captain. Wade Samir Saleeby, Sr. (1929-2003), served in the Army from 1946 to 1952, when he was honorably discharged. He served in the Honor Guard for General Dwight D. Eisenhower.

This collection contains photographs and images documenting the lives of the descendants of Labibee and Rasheed Saleeby after their early-twentieth century immigration to North Carolina. 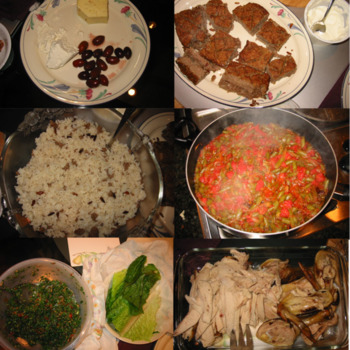 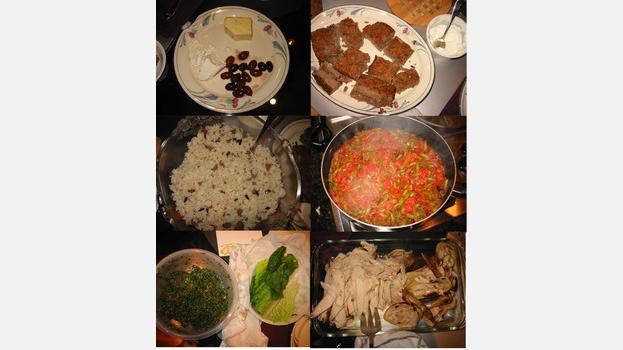 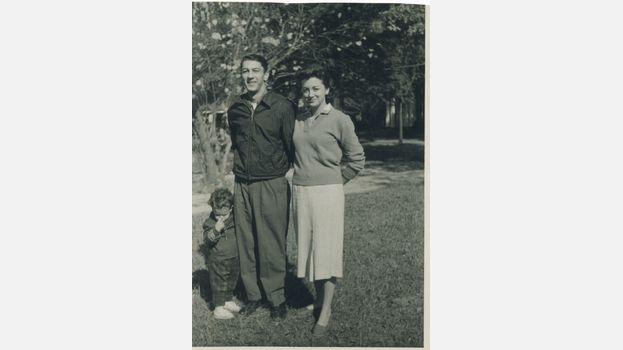 A photograph of young Wade and Kathleen Saleeby, standing outside together with a young child, perhaps their eldest son, Wade Samir Saleeby, Jr. 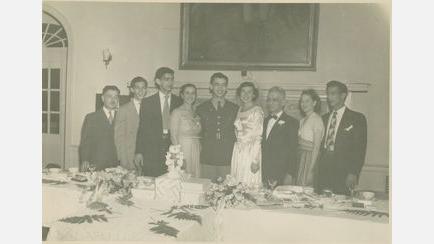 The Wedding of Fred and Pat Saleeby

A photograph of a group of people at the wedding of Fred and Pat Saleeby (center). The group is posed behind a long banquet table holding flowers, gifts, and cake. 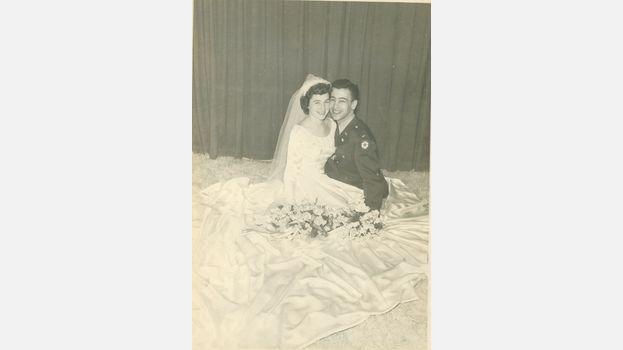 A portrait of Pat and Fred Saleeby on their wedding day, seated on the ground together on Pat's spread-out wedding gown. Fred is dressed in his United States Military uniform.