These materials were provided by Maggie Domit Bennett and primarily concern the life of her father, Moussa Domit, and his immediate family.

Moussa Domit was born May 24, 1932 in Mazraat al Toufah in Zgharta in northern Lebanon to Majed Moussa Domit and Jamili Yousef (Khoury) Jreige. His grandparents had spent time in Pennsylvania, and both his father Majed and his aunt, Margaret Domit (called Aunt Peggy), were born in the United States. In 1953 Moussa immigrated to Columbus, Ohio, to complete high school. After completing high school, Domit returned to Lebanon where he met Yvette Baini. Yvette was born in French Senegal, West Africa, but her parents returned to Lebanon when she was a child; she attended a French school in Tripoli.

The two married on February 11, 1960, and in 1961, Moussa and Yvette returned to Columbus so that Moussa could attend college. Though he originally hoped to become a writer, Moussa developed an interested in art, and he earned a Bachelor in History of Art at Ohio State University in 1962 and Master of Arts in Art History at Southern Connecticut State College in 1967, the same year that he became an American citizen. During this decade, the couple had four children: Maggie, Majed, Mark, and Matthew.

Domit achieved immediate success in the art field, conducting postgraduate work at Yale University before serving as associate director of the Corcoran Gallery of Art in Washington, D.C., from 1968 to 1970, and as a curator at the National Gallery of Art between 1970 and 1972. In 1972, Moussa was hired as director of the North Carolina Museum of Art in Raleigh, North Carolina, a position he held until 1981. During this decade, Domit developed the collection, providing exhibit space for international and multicultural artists and historic art pieces, and led the campaign to move the museum away from its original location in downtown Raleigh to a newly-built, modernized facility on Blue Ridge Road. In addition to his efforts to diversify the collection and create an appropriate facility to house the artwork, Domit worked to expand the museum’s staff and public programs.

In 1974, Domit assisted in the immigration of his sister, Cecilia Saleh, and her children. In 1981, the Domit family left Raleigh for Florida, where Moussa took a position as director of the Dixon Gallery and Gardens in Memphis before moving to the Appleton Art Museum in Ocala, Florida, in 1986. Towards the end of his life, Domit spent a great deal of time in Lebanon, where he worked to restore his family’s summer home to its historic condition. Moussa Domit passed away in 2005, but he is remembered in North Carolina as a visionary who developed the North Carolina Museum’s collection to international significance while simultaneously increasing its accessibility to community members of all ages and backgrounds.

The collection contains documents and articles related to Moussa Domit's career in the art field, family photographs, and early letters from Domit's adolescence in Columbus, Ohio.

Additionally, it contains valuable genealogical information in the form of family trees and an oral history. The collection also contains a diary and an autobiographical narrative written by Maron Domit Barkett, a First Wave immigrant and great-uncle of Moussa Domit. These documents may be of interest to researchers of early Lebanese immigrants as well as scholars of immigration and diaspora. 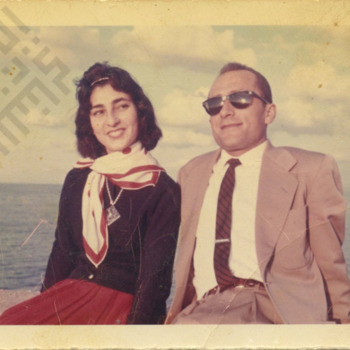 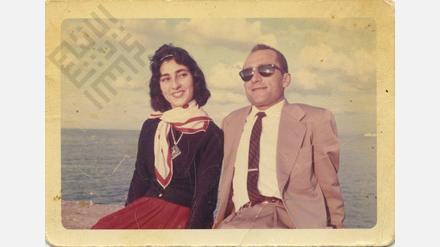 Moussa and Yvette by the Water

Photo of Moussa and Yvette at the beach 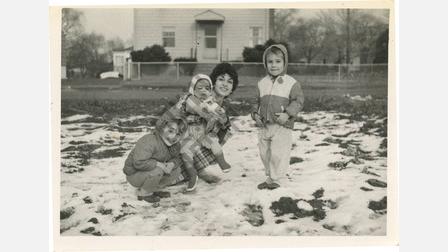 Yvette with Maggie, Majed, and Mark

Family photo depicting Yvette, Maggie, Majed, and Mark in the snow of 1966.

A picture of Moussa with Maggie Domit Bennett on her birthday. 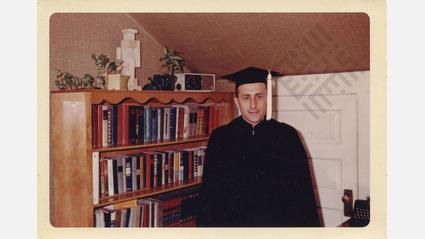