This collection contains oral histories and recollections created by members of the North Carolina branch of the Saleeby/Saliba Family.

Members of the Saleeby/Saliba family have maintained strong ties to one another throughout the generations, for a century, even as they spread geographically throughout the United States and the world. In addition to the strong family values which they have preserved throughout generations, this cohesion was aided by the 1916 creation of the Saleeby-Saliba Relief Association. The Saleeby-Saliba Relief Association served to unify and support disparate members of the family, and it often served to sponsor members who immigrated from Syria/Lebanon, aiding them in their transitions to new countries. While branches of the family spread across the world, the most common destinations were to North and South America, England, Africa, and Australia.

The oral histories and interviews presented in this collection represent inter-generational experiences of members of the Saleeby family in North Carolina. All of the pieces are descended, by blood or marriage, from the same Saleeby ancestor who lived in Souk-el-Gharb in modern-day Lebanon.

Over the years, the mission of the Saleeby-Saliba Association of Families has grown and changed. Since the turn of the twenty-first century, the Association has been increasingly interested in promoting unity through the preservation of family history and culture, particularly through the practice of genealogy. Members of the extended Saleeby/Saliba family have contributed several publications documenting the family’s history within the diaspora:  A Brief History of the Saleeby/Saliba Clan and Their Branches: N.D. Saleeby, Souk El-Gharb, Lebanon, 1950 andits major update, helmed by Callie R. Saleeby Stanley, the 2008 Worldwide Saleeby-Saliba Family from Ancient to Modern Times. Researchers are encouraged to seek out the latter source by contacting the family or by visiting the Moise A. Khayrallah Center.

This collection contains an interview with Callie R. Saleeby Stanley, author of the 2008 genealogy Saleeby-Saliba Worldwide Family From Modern to Ancient Times as well as two long-form recollections written by the children of Nellie Arab and Nasry Rasheed "Charlie" Saleeby. 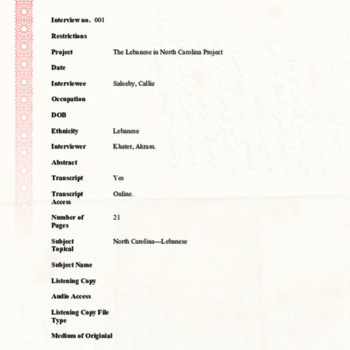 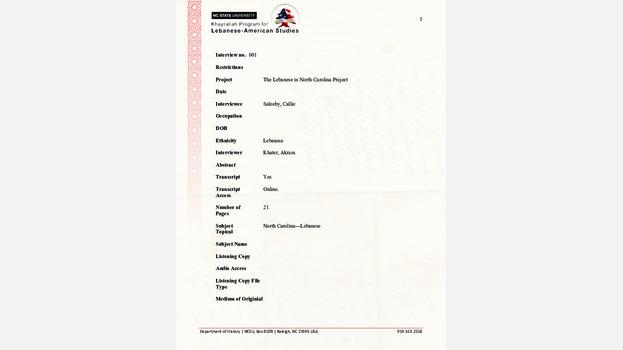 Transcription of interview with Callie R. Saleeby Stanley, conducted by Dr. Akram Khater. 66 minutes (see PDF). Stanley married into the Saleeby family as a young woman. She was the author of the 2008 genealogy Worldwide Saleeby-Saliba Family from… 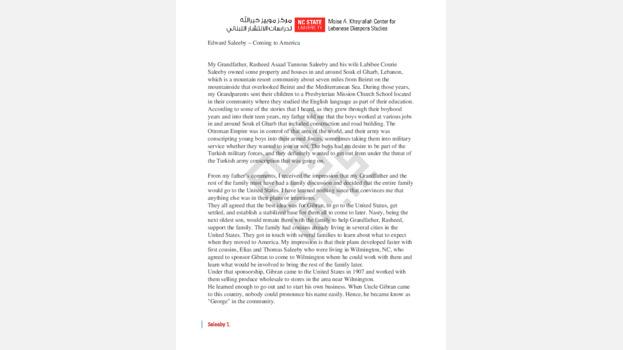 A brief account, given by Edward Saleeby, of the immigration of his paternal family including his father, Nasry Rashid Saleeby, uncle Gibran Rashid Saleeby, and grandmother Labibee Courie Saleeby. 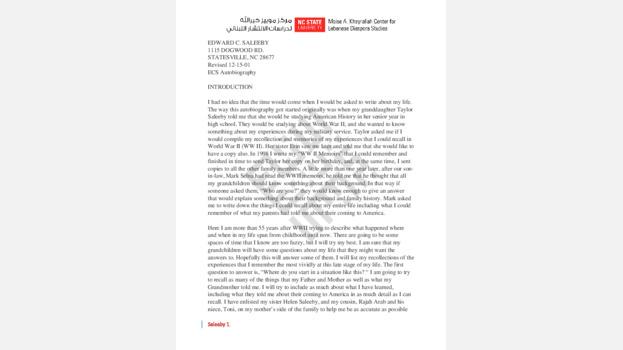 The autobiography of Edward C. Saleeby, revised in 2001. It contains detailed reminiscences of his childhood, time serving in the United States military during World War II, and his marriage and children. In addition to covering Saleeby's own life,…