These materials were provided by Mitchell Mack and relate to the history of the Mack family in Mooresville, North Carolina.

Hanna Makhoul Fakhoury was born in Roum, Lebanon and—on the encouragement of a friend who had settled in Marion, South Carolina—emigrated to the United States in 1903, leaving behind his wife, Naceem, and their children Charles, Nora, Side (Sahid), Lucille, Sophia, and Bahia. As he passed through Ellis Island, the clerk anglicized “Hanna” to “John” and shortened “Makhoul” to “Mack,” completely disregarding the man’s surname of “Fakhoury.” While some of Hanna’s descendants regret the loss of their family name, with its obvious Lebanese heritage, their ancestor accepted his new moniker and pursued his new life in America as John Mack. Unable to speak any English, John arrived by mistake in Marion, North Carolina; aided by a kind station master, he was directed to F.A. Jacobs of Charlotte, North Carolina, a Lebanese American who helped Mack. John Mack purchased merchandise and began selling items door-to-door in North Carolina.

In 1905, John Mack decided to return to Lebanon to visit his family and help them move back to the United States with him. However, Naceem was unsure about moving to a new country, and John returned only with his two oldest children, Nora and Charles, in 1908. A year later seventeen-year-old Side, the second son, decided to join his father and travelled with two friends to the country. Unfortunately, John and Naceem’s hopes to reunite were never fulfilled, for Naceem passed away suddenly in 1912, after which John retrieved the rest of his children.

After an early attempt to open a store in Charlotte failed due to a fire, the family opened John Mack & Sons in Mooresville, North Carolina, on December 24, 1912. While the children of John Mack grew and took on greater responsibility in the department store, John Mack himself continued his work as a travelling salesman. With Side, Nora, and—as she grew up—the youngest child Bahia all helping to run John Mack & Son, Charles, the eldest, pursued his own business enterprises. After opening a shoe store, Charles found success in a Confectionary store, providing candies, peanut brittle, and sweet ingredients at wholesale to other companies. At first Charles ran this shop with John Ikall, who married one of the Mack daughters, Lucille; after Joe left to open a restaurant, Charles continued to successfully run the business on his own.

Side Mack married Joe’s sister, Tabitha (Tabetta) Ikall Mack. The couple had four children together: Edward, Madeline, Margaret, and Side Mitchell. Side, taught himself to speak flawless English, became a well-respected member of Mooresville. In addition to leading and supporting local Boy Scouts, Side Mack served as a volunteer fireman and a member of the Masons for over fifty years; John Mack & Son sponsored the Mooresville Recreation Department’s athletic teams, further developing Mooresville’s community spirit. Side Mack passed away at age 79 in 1971, a beloved member of Mooresville’s community.

Side and Tabitha’s children built upon their successes and carried forth their values. Of their four children, the eldest daughter and youngest son carried on the tradition of running John Mack & Son. Madeline, the eldest daughter, was a talented artist and designer who left her education at Maryland’s Institute of Art and Design to help her family during the Great Depression; after the outbreak of World War II called her brothers to serve in the military, Madeline assumed a prominent managerial role in the business, helping her father to sustain it throughout the depression and World War II. Mitchell, the youngest son, attended college after his military service; though he had planned to pursue a graduate degree at Harvard Business School, he decided to return to Mooresville and start a family with his spouse Delores Corey Mack, after his brother, Edward, chose to pursue a career elsewhere. Mitchell, himself a lifelong Scout and recipient of the Silver Beaver Award in 1962, ran the store’s scouting department and the menswear, while Madeline managed womenswear, advertising, and merchandising. The store remained open and thriving until 1993, when the siblings decided to close the business in order to retire. Madeline passed away on March 31, 2006.

This collection contains photographs, articles, photographs of family artifacts, and interviews related to the history of John Mack & Sons as well as the Mack family, particularly Side Mack and his children. 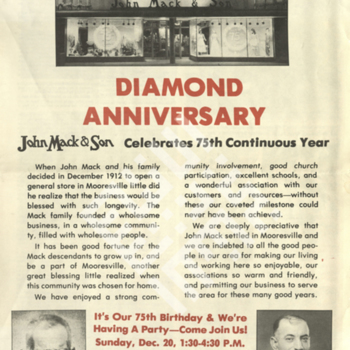 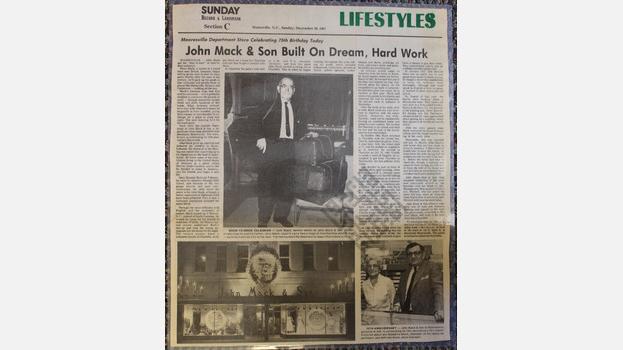 A newspaper article in the December 20, 1987 issue of the Statesville Record & Landmark celebrating the 75th birthday of the John Mack & Son department store in Mooresville, NC. 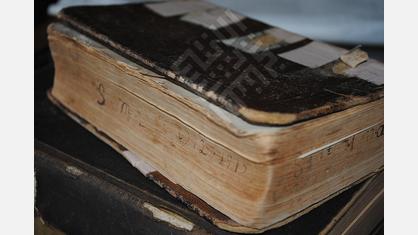 "Photographs of the Mack Arabic family Bible, including detail images of the front and back pages and inscriptions and photographs of the ephemera kept in the Bible at the time of the interviewer's visit to the Mack family.

The Mack Family History and a Pictorial Family Tree

This video was donated by the Mack family. It was first created in 2007 and updated in 2009. It contains a history and pictorial family tree of the Mack family, and was created for use at family reunions and celebrations. 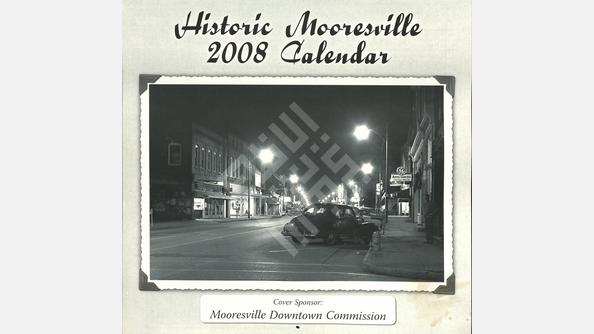 The 2008 Historic Mooresville Calendar, which featured archival photographs from Mooresville's history. The month of November was sponsored by John Mack & Sons Department Store and includes photographs of the family and the business.