Materials provided by Joseph and his son Ron Salem, 1910s-2007 and undated.

This collection contains materials related to the life of Joseph R. Salem and and wife, Amelia Mettrey Wehbie Salem. Joe was born in the village of Hammana, Lebanon on May 5, 1909 to Freda George and Shikery Salem. Freda and Shikery had four children together:  Renee (also called Rena), Bertha, Joseph, and Albert. In June of 1912, when Joe was about two and a half years old, Shikery initiated the family’s immigration to America. The Salem family planned to be permanent immigrants from the start:  soon after his arrival in New York City, on June 29, 1912, Shikery filed an immediate petition for naturalization. Shikery then joined members of Freda’s family, who had already immigrated to New Bern, North Carolina. He went to work as a peddler in rural North Carolina, selling goods primarily by foot. Through this hard work, Shikery hoped to save money enough money to quickly bring his wife and children to America to join him.

The family’s plans to reunite in America were derailed by the onset of World War One, which interrupted communications between the United States and the blockaded Ottoman Empire. Freda and her four small children were increasingly isolated; Shikery’s parents were still in Lebanon and they were supporters of the French. Shikery’s father, Joe's grandfather, Mackoul Salem, was executed by the Turkish during the war, and his mother, Lucy Joseph Salem, died from unknown causes--perhaps sickness or starvation. Freda and her children were forced to work in fields by the German and Turkish allies, and the famine that struck the country led Joseph and his siblings to beg for food in order to survive.

Though Shikery and Freda had no way of communicating to one another that they were still alive for the duration of the war, Shikery took action to reunite his family. In 1917, he enlisted in the United States Army. He was the first Lebanese American from Eastern North Carolina to do so, and according to a 1917 issue of the Morning New Bernian, he gave up a thriving business in order to serve his adoptive country. Shikery served in Battery A of the 113 Field Artillery, where he fought throughout French battlefields, including the Argonne Forest. He was awarded honors for bravery for saving the lives of two superior officers. In 1918, having proven his commitment through military service, Shikery re-applied for naturalization and was given citizenship.

Service in the military provided Shikery with an opportunity to reunite with his family:  he even hoped to travel straight from France to Hammana after the war. Though Shikery was returned with his unit to North America, Shikery was assisted by friends he had made in the army, including Robert Haines. With support from his fellow soldiers and the Red Cross, Shikery was able to locate his family and bring them to New Bern, North Carolina, in 1920. The Salem Family of 6 sailed out of Cherbourg, France to Ellis Island and settled in New Bern, NC their first home in America where other relatives already lived. Freda Salem settled into America as a homemaker while Shikery returned to business. A partnership with Frederick Habeeb allowed the two Lebanese Americans to purchase the New Bern Bargain House. This grew into a series of other business ventures including:  in 1926, the Craven Fruit Store; and, in the 1930s, a gas station, convenience store, and taxi service. Though Maronite Christians, the family attended the Roman Catholic St. Paul’s church in New Bern.

The two older Salem children were Renee and Bertha. Renee married David Halen of New Jersey; in the 1930s, Renee and her family assisted Shikery in running his businesses; later, she moved to New Jersey, where she lived until her death. Together Renee and David had 5 children: Frank, Raymond, Louis, Lucille, and Theresa. Bertha married Charles K. Fadel, a Lebanese American from Charlotte. The two lived in several cities across North Carolina, eventually settling in Fayetteville, where they opened and operated the Palace Grill. The two had four children together: Sammy, Frieda, Albert, and Shikery.

Joe and Albert, both younger, soon began to excel in school. Joseph, in particular, had an innate gift for language:  already bilingual in both Arabic and French, he quickly learned English, augmenting his formal lessons by exchanging English lessons with a classmate in return for teaching Arabic. Joseph soon began to excel in school, and by high school he was a top student, not only in his school in New Bern, but also in North Carolina. He graduated as valedictorian in 1929; A newspaper article in the New Bern Sun Journal dated May 15, 1929 was titled: “Joe Salem Leads Senior Class, Finishes Brilliant Record Speaks Three Languages.” This all came from Joe entering public schools in the fall of 1920 at the age of 11 being fluent in French and Arabic but not knowing a word of English.

Joseph attended the North Carolina State College of Agriculture and Engineering (now North Carolina State University) and studied electrical engineering. In 1942, Joseph married Amelia Wehbie, daughter of Mickel Mettrey and Mary Saliba Wehbie. That same year, he followed in his father’s footsteps of service and joined the United States Army. He served in military intelligence at Arlington Hall in DC during WWII as a cryptanalytic officer, using his language skills for translation and code breaking. Amelia also served as a member of the Red Cross. Joseph remained in the Army Reserves until 1963, when he was transferred to the Retired Reserves, having achieved the rank of Major with retirement in 1969. Joseph and Amelia had four children together:  Jay, Michael Ray, Donna, and Ronald. Jay is married to Maija and together they have 2 children Alex and Annie and a total of 4 grandchildren. Donna is married to Scott. Jay retired from a long career in Dallas, Texas with EDS Human Resources and is also a licensed pharmacist; Michael Ray retired from Progress energy as an accountant; Donna retired from Wake County Public School Systems teaching French, and Spanish and now teaches piano as she is an accomplished pianist; and Ron is a dentist and is licensed as a dentist and pharmacist.

Albert, the youngest son of Freda and Shikery, married Vivian Zaytoun, daughter of Ellis and Isabel Zaytoun, on July 14, 1937. Like his older brother, Albert served in the military, working as a Radio Operator for the United States Navy and earning seven Battle Stars. After his service, Albert and Vivian had four children:  Albert, Jr., Richard, Robert, and Mary Isabel. Albert and Vivian lived in North Carolina for most of their lives, eventually retiring to Tampa, Florida for the remainder of their lives.


Amelia Mettrey Wehbie Salem passed away at her home in Raleigh on February 5, 2009 at the age of 91. At that time she was survived by her husband Joe of 66 years, and her four children, daughter-in-law and son-in law and 2 grandchildren and 1 great grandson. She was also survived at that time by her two sisters, who have since passed, Nell Mettrey Kahdy, and Margaret Wehbie Saloom. She was predeceased by her other 6 siblings, Sam M Wehbie, William Mettrey, Chris Wehbie, Wehbie M Wehbie, Helen Wehbie and Marie Wehbie Mossberg. Amelia was a graduate of Hugh Morson High School in Raleigh and Hardbargers Business College. During her work Career she worked for the US Red Cross during WWII, Craven Regional Medical Center, The Raleigh News and Observer, NC Department of Agriculture, and the NC Department of Revenue. Amelia was known for her fabulous Lebanese cooking, her greenhouse propagation of Camellias, Japanese Maples, and hybrid tea roses. She never knew a stranger and was quick to start up a conversation.


Joseph Ramon Salem passed away at home a little over 2 years after Amelia, at the age of 102. Joe graduated Valedictorian of his New Bern High School graduating class and Cum Laude in Electrical Engineering at NC State College of Agriculture and Engineering (NCSU). After college Joe went on to become a Registered Professional Electrical Engineer consisting of employment with CP&L in Raleigh, handling general engineering problems and designing by hand electrical power plants. In his career he operated private Consulting Engineering businesses in Raleigh and New Bern, NC, designing huge electrical infrastructures for Hatteras Yacht, Weyerhauser, and the Town of Clayton, NC, just to name a few. Joe also served as City Electrical Engineer for the town of New Bern and became a full building inspector for the City of Raleigh until 1975. With still a brilliant broad mind, after retirement Joe thoroughly enjoyed substitute teaching until the age of 82 in Raleigh Middle and High Schools. Joe was a wonderful, peaceful, loving and devoted, husband, dad, granddad, friend and mentor to all he knew. He touched lives on many levels in a very special way. His astounding brilliant mind, and worldly knowledge was always captivating.

This collection contains photographs, certificates, and newspaper articles documenting the life of Joseph Salem and his family in North Carolina. 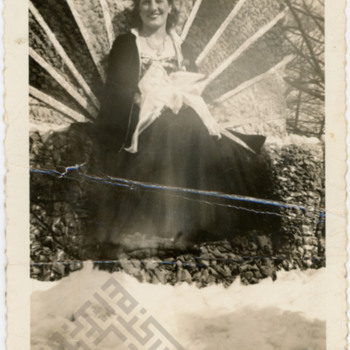 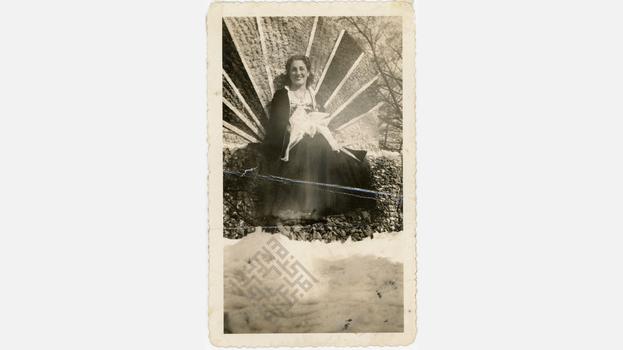 A photograph of Amelia Wehbie seated on a parade float and smiling at the camera. 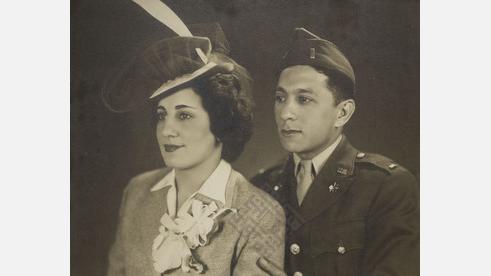 A portrait of Joseph Salem and Amelia Wehbie Salem taken for their wedding. Joseph is wearing his military uniform. 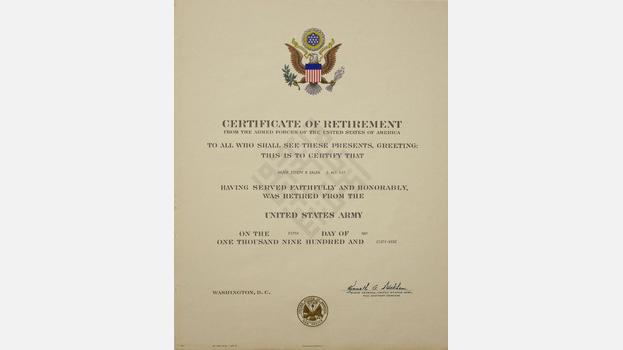 A Certificate of Retirement from the Armed Forces, specifically the Army, given on May 5, 1969 to Joseph Salem 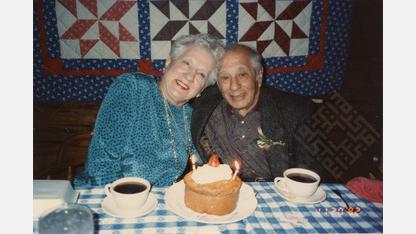 A photograph of Amelia and Joseph Salem posing seated at a table with a cake in front of them for their 50th wedding anniversary.