Ellis Zaytoun was born in Hammana, Lebanon on May 30, 1890. He immigrated to the United States in 1906, at the age of 16, along with two of his brothers. Five years after his immigration, in 1911, Ellis submitted an application for naturalization; he was naturalized in 1916. During this time, Ellis established himself as an integral member of New Bern’s immigrant and native communities: in 1913, he volunteered in the local fire department; and in 1916, he served as a member of the Syrian Brotherhood Society of New Bern, an early humanitarian group dedicated to providing aid to Lebanese, Syrians, and Armenians.

By 1910, the brothers had moved to New Bern, North Carolina. Ellis began work as a peddler and dry goods clerk, but soon shifted into diversified business ventures. In 1917, Ellis expanded his fruit stand into a permanent grocery. In 1930, he owned a restaurant; and by 1950 he had opened the Zaytoun News Agency. In 1940, Ellis was employed at John Hancock Mutual Life Insurance Company, and in 1957 he founded Zaytoun and Associates with his eldest son, Joseph.

All of Ellis and Isabel’s children assisted in the family businesses throughout their childhood and adolescence, and when they reached adulthood they carried on the family business ventures in various ways. Joseph studied economics at the University of North Carolina-Chapel Hill. He enlisted in the United States Marine Corps in 1942, and began his service after his graduation in 1943. Joseph, who had worked for the UNC-CH student newspaper, the Daily Tarheel, helped his mother and sisters run the Zaytoun News Agency. Later he served as president of the family insurance company. From there, he co-founded the Capital National Bank in 1973, which was merged with BB&T to become one of the largest banks in the Carolinas.

The youngest son, Henry Zaytoun, also became a successful businessman. Henry studied at University of North Carolina-Chapel Hill, and continued at the University of Maryland School of Dentistry. After a stint serving in the United States Navy, Zaytoun began practicing dentistry in Rocky Mount. In 1958, he pursued a Master of Science in Orthodontics from the UNC-Chapel Hill School of Dentistry; soon after, he and his family moved to Raleigh, where he established Zaytoun Orthodontics in 1959. Zaytoun Orthodontics was very much a family business: Henry’s wife Martha served as business manager, a job she was succeeded in by two of her daughters; two more children, Mary Paula Zaytoun Steele and Henry Zaytoun, Jr., followed their father into orthodontics.

In 1946, Joseph married Thelma Knuckley, the daughter of Lebanese immigrants from South Carolina. Thelma was committed to advocacy and community betterment: she volunteered at Rex Healthcare for decades, and was a tireless advocate for child health. Between 1977 and 1985, she was a member of the Governor's Advocacy Committee on Children and Youth; following this, she was a member of the N.C. Child Advocacy Institute. In the 1990s, Governor Jim Hunt appointed her to the North Carolina Commission on Volunteerism and Community service in the 1990s. In recognition of her commitment to volunteerism, Joseph Zaytoun established the Thelma Knuckley Zaytoun Scholarship for nursing education as a gift for their 45th wedding anniversary.

Together the two had four children: Stephen Zaytoun, Mary Zaytoun Benton, Robert Zaytoun, and Albert Zaytoun. Stephen Zaytoun joined the family business, extending Ellis Zaytoun’s insurance business into a third generation. Joseph also carried on his parents' commitment to community service. He served a four-year term on the North Carolina State Board of Elections beginning in 1961, under Governor Sanford. Later, Joseph served on the Cary Chamber of Commerce and the Cary Cultural Arts Commission. Joseph was also a leader in preserving North Carolina’s history: he was an instrumental part of the Tryon Palace Commission, which preserved and established Tryon Palace in New Bern from 1977 to 1985, and the Wake County Historic Preservation Commission. All of the Zaytoun children remained active in the Catholic church, and in 1999 Joseph was awarded the Pro Ecclesia et Pontifice Award from Pope John Paul II.

The collection consists of photographs, letters, documents, and articles relating to three generations of the Zaytoun family. 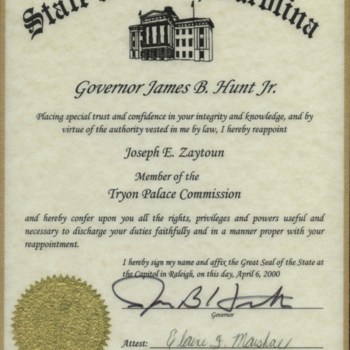 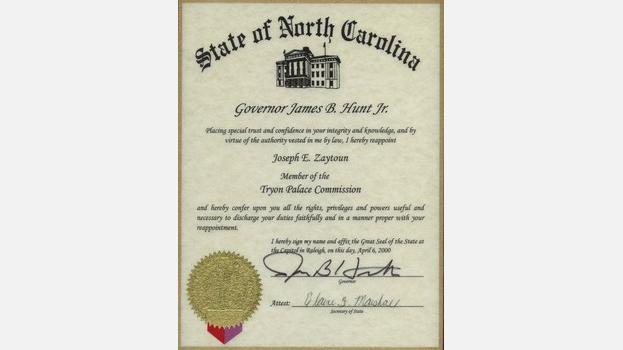 A certificate presented to Joseph Ellis Zaytoun by the North Carolina government, reappointing him to the Tryon Palace Commission. The certificate is signed by Governor James B. Hunt, Jr., and Secretary of State Elaine Marshall. The Tryon Palace… 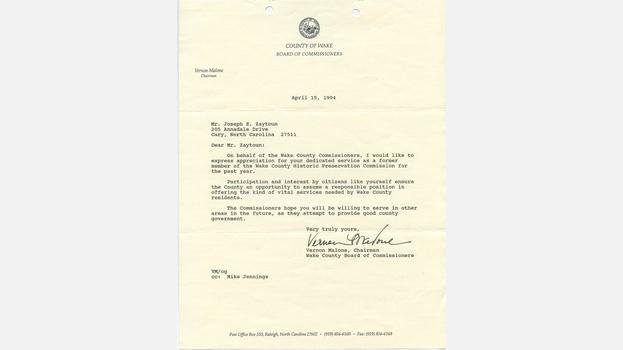 Wake County Board of Commissioners Letter to Joseph Zaytoun 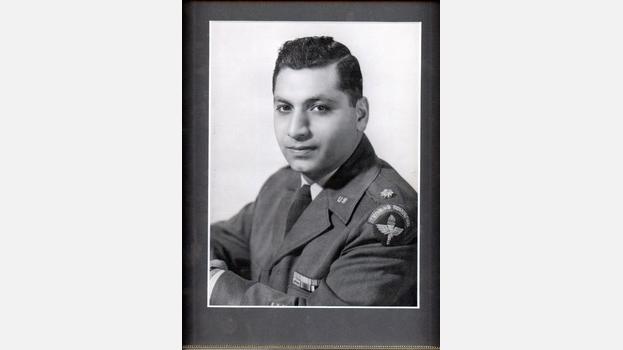 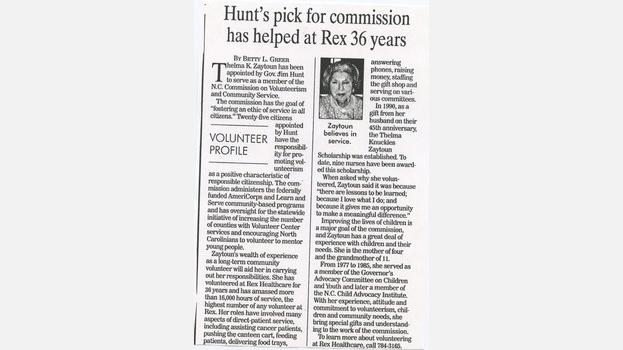 An article excerpted from an unknown newspaper titled "Hunt's Pick for Commission Has Helped at Rex 36 Years." The article describes Thelma Zaytoun's decades of volunteer work which preceded her appointment to the North Carolina Commission on…