These materials were provided by Barbara Kahdy Estes and primarily relate to the life of her parents, George Kahdy and Nellie Mettrey Wehbie Kahdy. The collection also includes images from a trip to Lebanon around 2010.

Nellie (Nell) Mettrey Wehbie was born in Elizabeth City, North Carolina on April 30, 1916 to Mike and Mary Wehbie. Mike(Mikail) Mettrey(Mitri) Wehbie was born in Mt. Lebanon on August 8, 1888 and Mary Nehra Wehbie, of the Saliba family, was born in Mt. Lebanon on January 25, 1896. Mike's family first came to the United States in the late 1800’s. Mike later went back to Lebanon and brought Mary over with him in 1906. In the early 1920’s Mike, Mary, and children traveled back to Bteghrine and built a summer home staying for 3 years. Nell and her siblings attended a French speaking school there before returning to the USA. Nell’s family, her parents and 8 siblings: William Mettrey, Helen Wehbie, Christmas Wehbie, Amelia Wehbie (Salem), Simon or Sam Wehbie, Margaret Wehbie (Saloom), Marie Wehbie (Mossberg), Wehbie Mettrey Wehbie, moved to Raleigh, North Carolina from Elizabeth City. Mike had a good deal of real estate transactions, a mercantile store, and imported the first legal load of beer after Prohibition. Mike opened several businesses on Fayetteville Street including the Log Cabin which was a popular restaurant and tavern during WWII. Nell graduated in 1938 with a teaching degree from Meredith College with concentrations in English and Foreign Languages.

George Kahdy was born in Baskinta, Lebanon on October 6, 1921. George and his parents, Adma Sawaya and Asaf(Assif) George Kahdy came to the United States when he was 18 months old. He has four sisters: Afifi (Adele), Genee(Janette), Sally, and Virginia. George was raised in Macon, Georgia and attended Lanier School for Boys where he participated in ROTC. He spent one year at Georgia Tech before volunteering as a buck private in the 30th Infantry Division of the United States Army on September 16, 1940. George worked at Fort Jackson, South Carolina training draftees, became a fighter pilot in the Army Air Corps, and taught graduate pilots gunnery and fighter tactics at Eglin Air Force Base in Florida.

In 1944, George’s mother was traveling to Raleigh, North Carolina to visit her old friends from Bteghrine, Lebanon, Mike and Mary Wehbie. George took a train to Raleigh to see his mother for the weekend, which is where he first met Nell Mettrey and the two immediately felt a connection. Nell was working as a high school teacher in Warsaw, NC at the time, but the two continued to correspond and see each other when they could. Nell worked for the Red Cross in 1944 in Washington D.C., where she lived with Amelia and Joe Salem (see the Salem Family collection). Captain George flew military planes from Florida to see her when planes needed delivering in D.C. He spent time in France and then was shipped to the Pacific but the War ended before he engaged in any battle.

On July 9 of 1944, seven months after their first meeting, the couple got married in Raleigh at Christ Episcopal Church. While George was stationed in Eglin, the couple lived in Milton, Florida and on July 14, 1945 while living in Florida, they had their first child, Barbara. On January 16, 1948, Nell gave birth to twins George and Georgette. Nell and George moved to Knightsdale, North Carolina where Nell acquired a teaching job and George went back to college at Wake Forest University on the G.I. Bill. After graduating, George began teaching math and science at Needham Broughton High School, where Nell was already teaching multiple language courses. Nell was honored in the 1950’s and 60’s by the American Foreign Language Association along with ten others as the best high school teachers in the United States. During the couple's time teaching, the two earned Masters degrees at the University of North Carolina at Chapel Hill.

In 1956, Nell received a Fulbright Scholarship to study at the Goethe Institute in Munich, Germany for the summer and after returning to Needham Broughton began offering German courses to the students. She was affiliated with the American Institute of Foreign Studies where she led students and teachers to England, France, Switzerland, Austria, Germany, and Spain for 25 summers. Nell remained with Needham Broughton for 28 years as a teacher despite being offered numerous promotions. She was head of the Foreign Language Department.

George accepted a Principal position during his third year of teaching at Needham Broughton and, for 13 years served as principal of various schools: William G. Enloe High School from 1962 to 1967 then Assistant Superintendent of Raleigh Public School 1967 to 1969. He accepted the challenge of integrating the Raleigh Schools as ordered by the Federal Government. As State Director of Special Education 1969 to 1985, he began one of the State’s first Kindergarten expanded education for the handicapped, started two Governor’s Schools for gifted students, and worked with Governor Jim Hunt to start the school of Math and Science at the Highschool Level.

Once George retired, he helped Nell with the summer study abroad programs for North Carolina Students to France and Germany. He then accepted a position as Director of The North Carolina Business Committee for Education with Governors Martin and Hunt. This helped coordinate 100 of the largest N.C. Businesses in N.C. to establish Adopt a School Programs recognizing and rewarding outstanding teachers and tailoring programs to find and set up classes for disadvantaged childrden who dropped out of school.

George achieved the rank of Major by continuing his military service in the active reserve. In 2012 at the age of 90, he had a “Ride in the Sky” where he took up a AT-6 Texan plane aided by his friends for History of Flight.

Students from Enloe established a scholarship for outstanding students in need and managed by CFWNC in George’s honor. The American Institute offered a yearly scholarship, in honor of Nell, through Needham Broughton for students planning on pursuing teaching foreign languages.

Nell passed away in July 2015 at the age 99 with her loving family all around her. George is still very active and independent at the age of 98 living at The Cedars in Chapel Hill. Their three children have had successful careers: Barbara Kahdy Estes started a private practice Physical Therapy Corporation out of Atlanta before moving to the mountains of N.C., George Kahdy Jr. is a veterinarian outside of Raleigh, and Georgette Kahdy Stone taught French and Spanish and now lives in Charleston, SC. Their 3 children have delighted them 5 grandchildren, 2 step grandchildren, 6 great grandchildren and 3 step great grandchildren. George continues to be a very inspiring person to his family, friends and former associates and students. He misses Nell every day as do all who knew her. 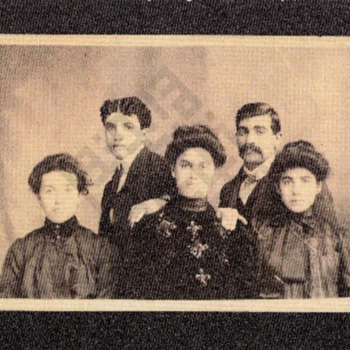 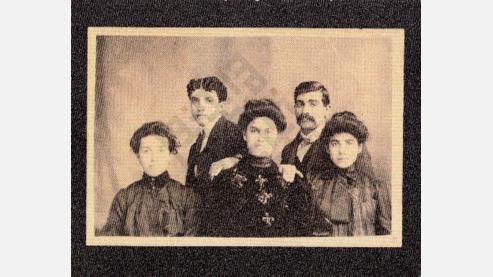 Kushwee Kahdy, Asaf Kahdy, and other unknown relatives in formal attire. The back of the photo says, "L to R, Papa's mother Kushwee Kahdy, Papa - Assif Geo. Kahdy, other relatives." Underneath the relative description there is a note with an arrow… 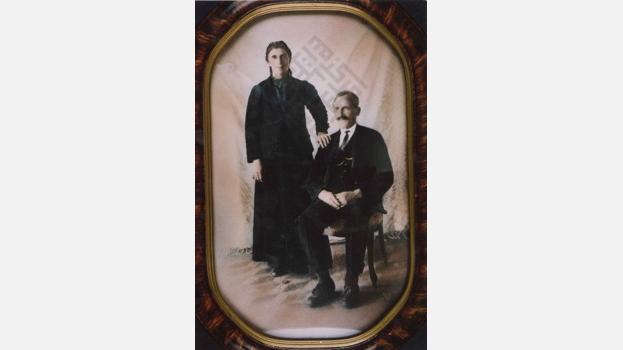 A framed portrait of Marta Sawaya and Dr. Habib Sawaya in formal attire. Caption on the back reads, "Marta died 1901 or 2 and Dr Habib Saway died before Marta. Betegrine, Lebanon Late 1800's. George A. Kahdy's grandparents in Lebanon maternal side.… 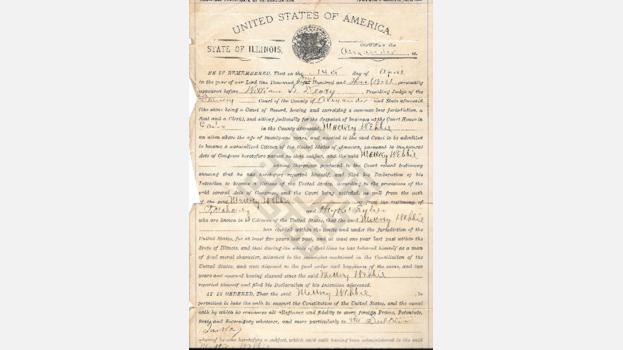 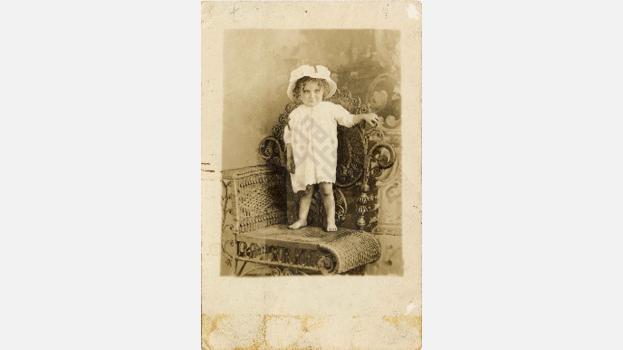