Vol. 2 No. 1 of الفنون, Al-Funun, was published in June 1916. It is the first issue published after a two and a half year hiatus from the journal, which was interrupted by the outbreak of World War I. It begins with an uncredited statement of purpose for the journal, possibly written by owner and editor Nasib Arida. The issue contains work by several familiar figures in the New York Arab-American literary community including: Kahlil Gibran, Salim Yusuf al-Khazin, Nasib Arida, and Mikhail Naimy. Arida’s contribution is the first portion of a novella, Qissat Dik al-Jinn al-Himsi. It also picks up on the serialization of Ameen Rihani’s novella Zanbaqat al-Ghawr [The Lily of the Valley] which began publication in 1913. The issue also contains several translations, illustrations, and work by classic Arab poets. 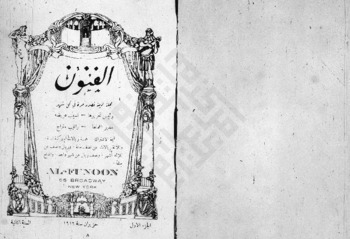