Vol. 1 No. 7 of الفنون, Al-Funun, was published in October 1913. It begins with a photograph of Ameen Rihani and features the first portion of a novella, Zanbaqat al-Ghawr [The Lily of the Valley], that was serialized in Al-Funun. Other original works include drawings by Kahlil Gibran, a short story by Mikhail Naimy, an article by Khalil al-Khayyat, a piece of criticism by al-Khuri Iliya al-Hamati, and a poem by Nasib Arida published under his pen name, Alif. Authors whose works are translated in this issue include Victor Hugo, Fyodor Sologub, and Walt Whitman. 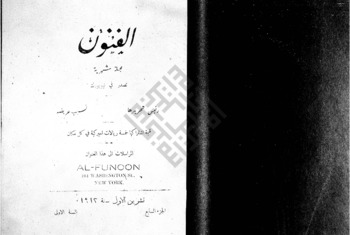