Vol. 1 No. 6 of الفنون, Al-Funun, was published in September 1913. A drawing and an article by Kahlil Gibran are included in this issue, along with articles by Farid Ghusn and Abd Allah Masuh. This remainder of the issue is largely made up of translations. Authors who are translated in this issue include the Polish Symbolist Stanisław Przybyszewski and the Austrian poet Peter Altenberg. The issue also includes works by political and historical figures such as Abraham Lincoln, Peter the Great, and Caesar. In addition to these Western figures, the issue includes quotations and sayings attributed to figures from Arabic history, the pre-Islamic sage and philosopher Aktham Ibn Saifi and the early Muslim caliph Umar Ibn al-Khattab. The issue includes art by Polish painter Henryk Siemiradzki and Jewish artist Ephraim Lilien. 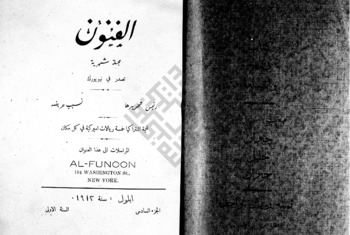