Vol. 1 No. 4 of الفنون, Al-Funun, was published in July 1913. The first piece in the issue is a short story by Ameen Rihani, and towards the end there is a translation credited to Nasib Arida. It is also the first issue to include credited work by Mikhail Naimy: a piece of literary criticism about Kahlil Gibran’s 1912 book  Al-Ajniha Al-Mutakassirah, or The Broken Wings. Another member of the Pen League, Ilyas Ata Allah, also published a story in this issue. Though this issue represents an increase in writing by the authors who would form the Pen League, like earlier issues it contained a number of translations from European authors, with a heavy representation of Russian literature—in this case, Ivan Turgenev and esteemed Russian poets Alexander Pushkin and Gabriil Derzhavin. This issue also includes a translation of a piece by the female Danish author Karin Michaelis. Also included are two drawings by Ephraim Moses Lilien, the Jewish artist and Zionist credited as a founding member of the Bezalel school of Jewish art. 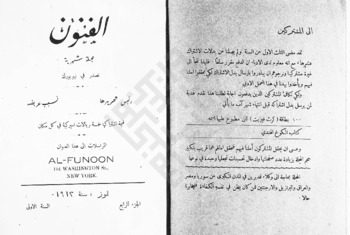