Vol. 1 No. 3 of الفنون, Al-Funun, was published in June 1913. Unlike the first two issues, this journal contains a greater mixture of genres:  in addition to poetry and short stories, this issue contains many essays, including several by Arabic writers and many others by unknown authors. This issue contains a feature on the Russian author Leo Tolstoy, with a translation of his work and two photographs related to him:  one a portrait and the other an image of his grave. Many of the translators were unknown, but at least one piece was translated by Nasib Arida. Arida also included one of his own poems, which he published under the pseudonym Alif. Two contests were proposed in this issue, presumably to encourage original submissions. 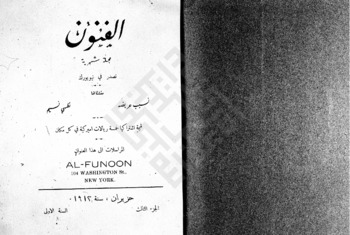