Mira’at al-Gharb, [Mirror of the West], was one of the longest-running Arabic newspapers in the United States, published from 1899 until 1961. It was founded by Najeeb Diab and owned by his family until its closure. In addition to its significant longevity, Mira’at al-Gharb is important for its affiliation with the Orthodox faith. As a counterpoint to the Maronite viewpoints that are often predominantly associated with the early Syrio-Lebanese immigrants, Mira’at al-Gharb provides valuable insight into the religious, political, and intellectual diversity of the early immigrants from Greater Syria.

Najeeb Moussa Diab was born in Roumieh, Mount Lebanon, on August 6, 1870 and died on July 11, 1936. He immigrated to the United States in March 1893, at the age of 22. He was naturalized five years later, in 1898. Almost immediately upon his arrival, Diab began working with the Arbeely family, apprenticing on the first Arabic-language newspaper in the United States, Kawkab Amirka. Though young, Diab displayed a talent for newspaper work, for he was soon writing and editing the paper.

In 1899, Diab left Kawkab Amirka to found his own newspaper, Mira’at al-Gharb, or Mirror of the West. Though the early years of the newspaper have been largely lost—presumably consumed by a fire that took place in the paper’s offices—Diab seems to have established a unique voice very quickly. In part he accomplished this by taking an oppositional stance against Al-Hoda and its firebrand, Maronite-affiliated publisher, Naoum Mokarzel. The two men often exchanged spirited—and occasionally hostile—exchanges with one another through the respective platforms of their editorials, sparring particularly over their differing views of the future of their homeland. While Mokarzel was a Lebanese nationalist, Diab favored an undivided Syria; in fact, his viewpoints may be seen as an early expression of pan-Arabic identity.

Like Mokarzel, Diab was politically active. He was a founding member of America’s United Syrian Society, and in 1913, he attended the first Paris-Arab Syrian Conference as its delegate. At this event he gave a speech outlining a plan for an autonomous state of a united Syria within the Ottoman Empire—a position that he upheld, in part, due to his opposition towards French involvement in Syria. Still, his editorials and newspaper were slanted against Turkish rule, a position which—according to the English-language newspapers that reported on it—led the Ottoman Empire to confiscate his land in 1902, an action which Diab reported to the U.S. State Department. This, however, had little impact, and Diab’s land and standing in his homeland were not restored until after World War I.

In addition to international politics, Diab used Mira’at al-Gharb to advocate for Syrian immigrants in the United States, participating in national debates over Arab-American citizenship that characterized the 1910s. He encouraged political participation from his reader, emphasizing the importance of voting. He also supported Arabic literature in the United States:  the newspaper had an affiliated publishing house, Mira’at Press, which published both nonfiction and fiction, including many works by the writers affiliated with the Pen League, such as Mikhail Naimy, Kahlil Gibran, and Elia Daher Madey [Elia abu Madi].

Just as Diab had begun his career under the mentorship of the Arbeely family, in the 1910s and 1920s he provided similar experience to younger immigrants. Most notably, in the 1920s Diab hired the poet Elia abu Madey to write for and then edit Mira’at al-Gharb. Madey marred Najeeb Diab’s eldest daughter, Dorothy, in 1920. Following the example of his father-in-law, in 1929 Madey left his position as editor-in-chief to found his own newspaper, As Sameer. The newspaper business ran in the family in other ways:  after Diab passed away in 1936, his wife, Angelina Diab, managed the paper until her death in 1961.

A portion of the newspaper is restricted for online viewing due to copyright restrictions (public domain). Researchers should contact us to arrange to view the rest of our holdings.

The center holds: September 1910 through December 1954 and are in the process of digitizing the complete run, which ends in 1961. 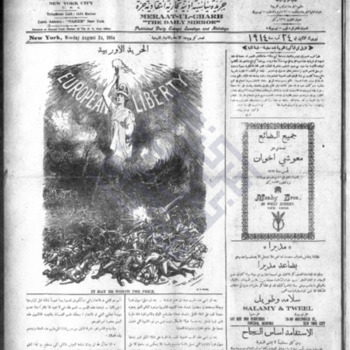 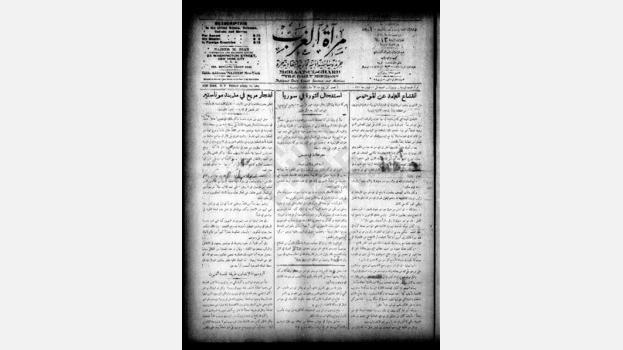 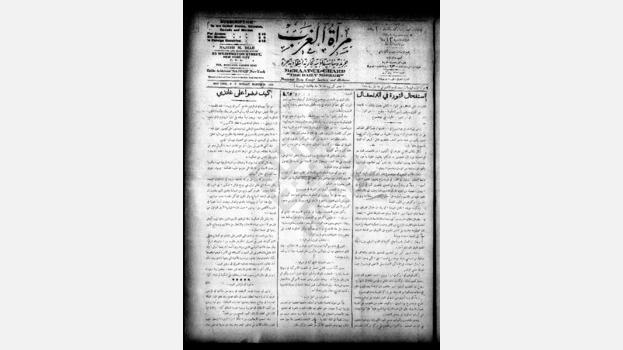 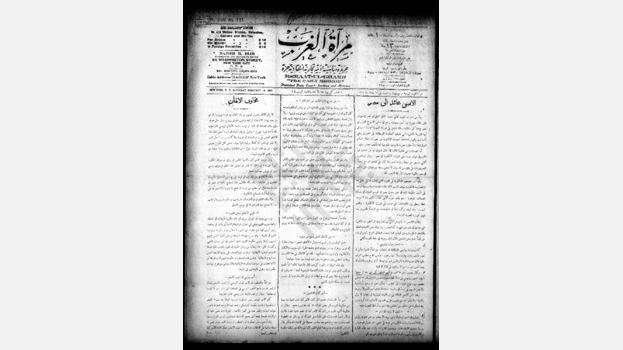 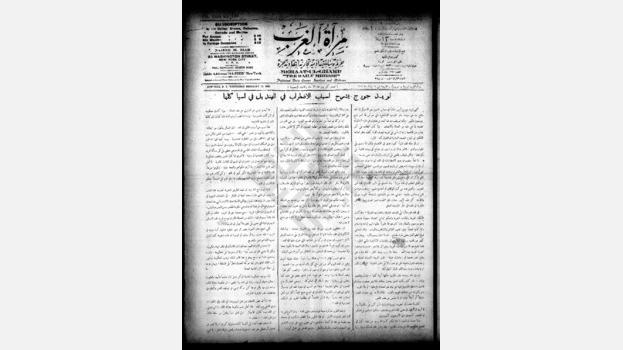