الفنون, Al-Funun [The Arts] was an Arabic-language literary journal published in New York City by Nasib Arida (1887-1946). Arida was born in Homs, Syria in 1887 and immigrated to the United States in 1905. Initially he worked in a textile factory, but the well-educated Arida soon moved into publishing, working as an editor before establishing his own press in 1912. His press, al-Atlantic Publishing Company, was renamed al-Funun Publishing Company in 1916. Arida published the first issue of al-Funun in April of 1913; it continued through the end of that year, when publication was interrupted by the outbreak of World War I. Two years later, in June of 1916, the publication was revived, and it was published semi-regularly until August 1918. The paper ultimately folded due to financial difficulties and the shortage of both material and manpower caused by the war.

Despite its irregular publication, al-Funun was an important early forum for the creation of Arab-American literature. Within its pages, authors such as Amin Rihani, Elia abu Madey, Kahlil Gibran, and Mikhail Naimy experimented with new literary applications of the Arabic language in short stories, essays, and poems. The journal also published drawings and woodcuts by Kahlil Gibran, along with reproductions of art and photographs by other artists. The journal also published numerous translations from English from authors as diverse as Oscar Wilde, Nathaniel Hawthorne, Ivan Turgenev, and Friedrich Nietzsche; of particular interest to Arida was the work of Russian and Eastern European Symbolist poets. Though the focus of the journal was on literature and art, it was not disengaged from politics:  the October 1916 edition of the journal was a special issue dedicated to the “Crisis in Syria” as a result of World War I.

Al-Funun is significant for its relationship to al-Rabita al-Qalamiyya, or the Pen League. In 1915, Arida and Abd al-Masih Haddad—owner of the newspaper as-Sa’ih [The Traveler]—officially formed the Pen League in 1915. On June 29, 1916, as-Sa’ih published a manifesto for the literary society, stating that its primary goal was to revitalize Arabic as a literary language.  Though this first formation of the Pen League dissolved within a matter of months, by September 1916, authors identified themselves as members of the Pen League in both al-Funun and al-Sa’ih. Throughout its years of publication, al-Funun brought together the era’s most prominent male Mahjar authors, furthering a common goal of crafting a distinct Arab American literary movement. The forging of a shared identity throughout the 1910s undoubtedly contributed to the (re)formation of the Pen League in 1920. This version of the Pen League was stronger and longer-lasting, and many of its core members are translated and widely read to this day. Moreover, the original poetry, essays, and fiction printed in the pages of al-Funun were republished throughout the Middle East in the ensuing decades. The new style of poetry and prose pioneered by the authors affiliated with the Pen League left an indelible legacy upon global Arabic literature.

This collection contains the full run of al-Funun in pdf format; some, however, display damage from the microfilm or from the original books from which the microfilm was photographed. The journal contains:

Nonexclusive right to authorize all uses of these materials for non-commercial research, scholarly, or other educational purposes are granted to Khayrallah Center pursuant to Creative Commons Attribution-NonCommercial-ShareAlike (CC BY-NC-SA). 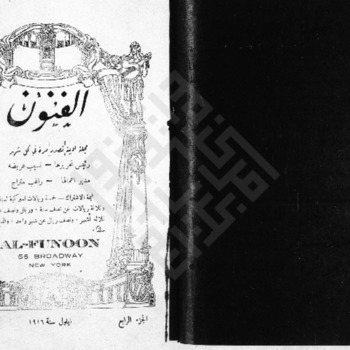 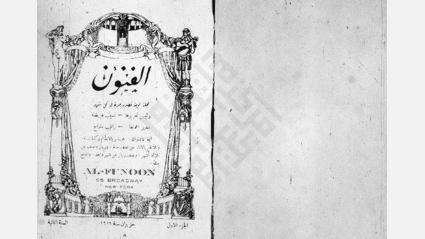 Vol. 2 No. 1 of الفنون, Al-Funun, was published in June 1916. It is the first issue published after a two and a half year hiatus from the journal, which was interrupted by the outbreak of World War I. It begins with an uncredited statement of purpose… 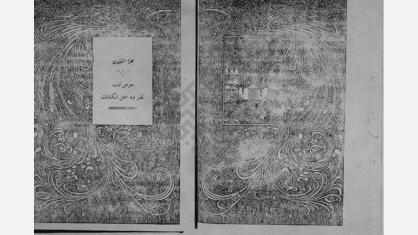 Vol. 1 No. 9 of الفنون, Al-Funun, was published in December 1913. This issue continues the serialization of Ameen Rihani’s novella Zanbaqat al-Ghawr [The Lily of the Valley]. Other work originally written in Arabic includes a piece of criticism by… 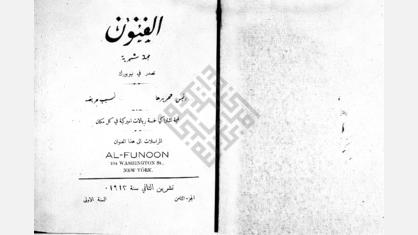 Vol. 1 No. 8 of الفنون, Al-Funun, was published in November 1913. This issue continues the serialization of Ameen Rihani’s novella Zanbaqat al-Ghawr [The Lily of the Valley]. Also included are an essay by Kahlil Gibran, a short story by Ilyas Tamir… 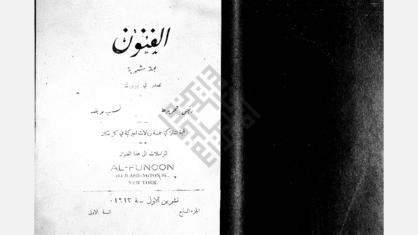 Vol. 1 No. 7 of الفنون, Al-Funun, was published in October 1913. It begins with a photograph of Ameen Rihani and features the first portion of a novella, Zanbaqat al-Ghawr [The Lily of the Valley], that was serialized in Al-Funun. Other original…