كوكب أمريكا, or Kawkab Amirka [Star of America] was the first Arabic-language newspaper published in the United States. It was published in New York City between 1892 and 1908; at first it was released on a weekly schedule, but in 1898 it was upgraded to a daily paper. The roughly 300,000 copies per issue were circulated to subscribers across the world:  the paper claimed an audience that spanned from North to South America and across the Ottoman Empire and Arab-speaking world.

Kawkab Amirka was founded with the goal of "bringing its eastern and western readers into closer and more intimate relations." The paper published articles from correspondents in Turkey, Egypt, India, Persia, Syria (modern day Syria and Lebanon), and the Barbary States of Morocco, Algiers, Tripoli, and Tunis. Though it circulated in the Ottoman Empire as well as in the United States, in its first issue it stated its intent to express the "true interests" of the early Arabic-speaking diaspora:  "the 150,000 Ottoman subjects scattered throughout Europe, North and South America" ("Introduction," vol. 1., no. 1). To this end, the newspaper was primarily published in Arabic; however, many of the article titles were rendered in English, and many of the issues included articles in English. English-language newspapers in New York City often pulled from Kawkab's reporting for news from the Levant.

The founding of this seminal paper is shrouded in mystery. According to Elizabeth Boosahda, historians have traditionally believed that the paper was founded by brothers Ibrahim [A.J.] and Najeeb Arbeely[Arbili], and that the paper's first editor--and thus the first Arab editor in America--was Najeeb M. Diab. However, Lillian George Shoucair [Choucair] has argued that her father-in-law Said Shoucair, who was living in America as a political exile due to his criticism of the Ottoman Empire, was both the founder and the first editor of the paper, and that the Arbeely brothers merely provided financial support (85-86). In addition to their involvement in the newspaper, the Arbeely brothers went on to have distinguished careers:  Najeeb worked at Ellis Island, interviewing and assisting new Arabic-speaking immigrants; Ibrahim, following in the tradition of his father Dr. Joseph Arbeely, was a physician.

The paper is broadly representative of an Orthodox Christian view, and directs itself to an audience with similar beliefs. Like Shoucair, the Arbeely brothers had fled the Ottoman Empire after criticizing the Sultan; however, the paper took a predominantly neutral, or even complimentary, tone towards the Ottoman Empire. Nonetheless, the paper was associated with the Young Turks movement in the Ottoman empire at various times of its publication.

The Khayrallah Center is proud to present digitized copies of the surviving issues of Kawkab Amirka, which begin on April 15, 1892 and end on February 28, 1896. The English portions of the pdf are fully searchable, providing a simple index of the topics covered in these years of the paper. This valuable primary source material will be useful to scholars of early Arab immigration, diasporic identity formation, religion and politics, and many more. 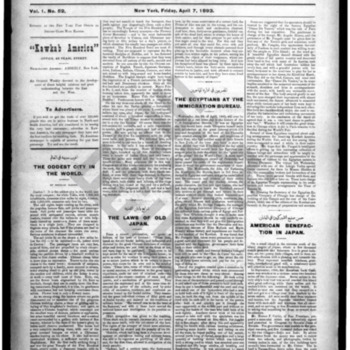 Volume 1, No. 1 of كوكب أمريكا, Kawkab Amirka. English articles include:  an introduction to the publication's goals; an article praising Ottoman Empire Sultan Abdul-Hamid Khan; a description of violence and prejudice against immigrants in the lower… 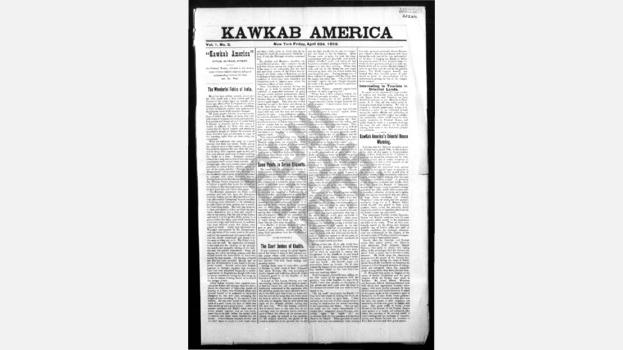 Articles in English in this issue include the first in a series on Syrian etiquette; an account of the reception given to celebrate Kawkab Amirka's first issue; travel accounts describing the fakirs… 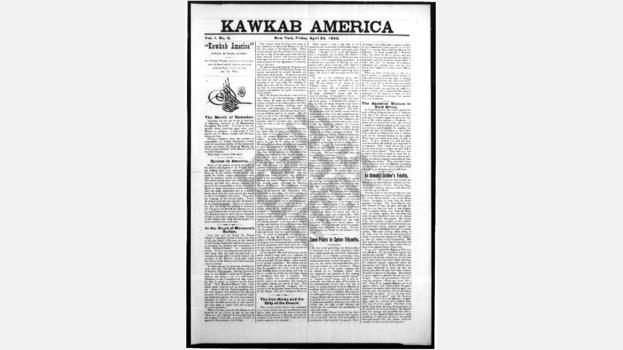 Volume 1, No. 3 of كوكب أمريكا, Kawkab Amirka. Articles in English include a brief profile of Syrians in America; an encounter with Sidi Moulayel-Hassan, sultan of Morocco; a travelogue related by a Syrian travelling by railroad across the American… 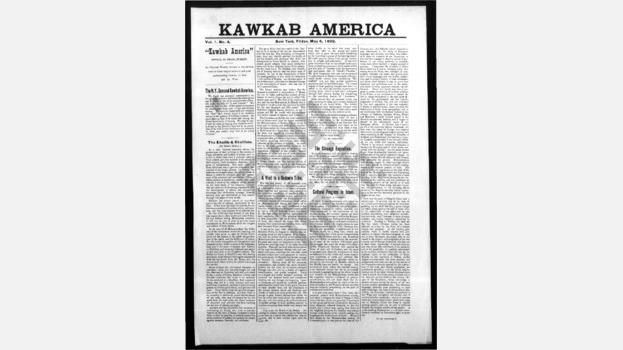 Volume 1, No. 4 of كوكب أمريكا, Kawkab Amirka. English articles include: a brief history of the caliphate; a travelogue about visiting with the Rawahla tribe of Bedouins; and an overview of the culture of Islam. Arabic pieces include articles on: …